Which is harder for an illustrator/author – creating a book from scratch or revisiting an existing one?
There is freedom in conceiving a new book, but the opportunity to revisit an old favourite is a rare privilege.

Little Robin was my first book and it means the world to me. I imagine it also means a great deal to others, judging by the amount of correspondence I still receive! I am so humbled and thankful for that.

Although I am very proud of it and what it represents, the art was pretty much what was evolving in my sketchbook way back then. I was lucky enough, all those years ago, to have an art director look at those early scratchy sketches and say ‘Do it like THAT!’ Over the years, my art style and working methods have changed somewhat. For various reasons I have always wanted to re-illustrate this story.
20 years on, I was fortunate enough to have the chance to make Little Robin fly again.

But oh, the things to consider! It was essential to honour the original whilst exploring my new working method. Originally, I used ink and watercolour, and although I still use that medium, I now work digitally a lot.

I wanted to keep the sweetness and gentleness of the character, whilst creating simple atmospheric backgrounds. 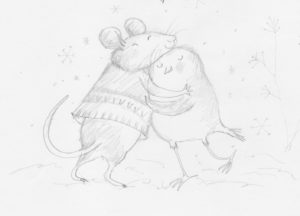 I pinpointed what it was in the characterisation that struck the deepest chord with me emotionally, and worked on recreating this. I’d wanted for such a long time to re-illustrate this story. 20 years! When the long hoped–for opportunity came, I sat at my table, with a blank sheet of paper – and came out in a cold sweat!

I had the lovely luxury of two extra spreads. This meant repaginating, considering the narrative flow – where the page turns would most delight the reader.

There were some tough decisions about what to keep and what to let go. Essentially, I was distilling a book I had lived with and loved for years into a completely new way of working. It was a terrifying joy. But when I found my new Robin, it felt like coming home.

The deadline was excruciatingly, terrifyingly tight. Life! C’est ainsi, la vie! For Little Robin to leave the nest in time for Christmas, everything had to be finished by February 2018, and the wonderful people at Nosy Crow were going to move heaven and earth to get it printed in time for the 20th anniversary.

Not everything went smoothly: at one point in the development of the new book it was suggested that we needed to see more animal friends in the backgrounds and they should wear winter clothes. Frog should have a scarf and skates and we should see the animals houses.
My initial reaction was “WHAAAAAT!???” Another cold sweat.
To me, these suggestions were wrong. If we saw their warm, cosy houses, and if they wore winter clothes, the story just didn’t make sense!

It’s gut–wrenching to have so much invested in a project with a ridiculously tight deadline and you are asked to do something you feel spoils everything.
I was convinced it was a huge mistake but I didn’t have the time or confidence to argue. So I tried it. But only in black and white, because I was convinced it was wrong. 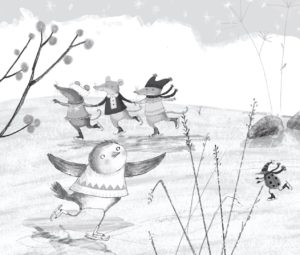 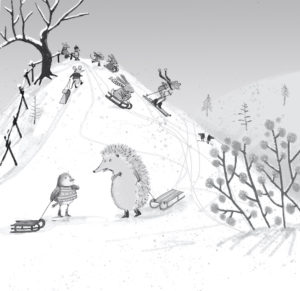 After over a week of solid redrawing, I received an “Ahem” phonecall. Everyone was completely utterly and fulsomely apologetic about the ‘clothes‘ and the ‘houses’. They were desperately sorry, because I’d wasted two precious weeks.

But, sometimes in making a book, one has to try things. You need to see it manifested in front of you – only in black and white, thank goodness – to realise that it doesn’t work. It’s part of the process, and one can learn a lot from it. But oh, I really desperately needed those two weeks! I took a deep breath and carried on with the colour art.

Funnily enough, a robin started peeking in my studio window – which I hoped was a good omen!

It was wonderfully absorbing to choose my colours. I wanted the palette to be very restricted. This would allow the characters to come to the fore. I wanted nothing to detract from the simplicity and the profundity of the story.

I took the natural colours around me: the stone of my house, the rosy Winter Limousin skies, heavy with the threat of snow, the sculptural stalks of the wildflowers in the paddock. Squirrel’s tree is the sweet chestnut near my house that terrifies the life out of me when we have huge storms. 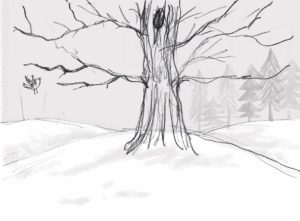 I drew my characters using 8B graphite pencils, which I love for their texture and softness. Here’s a scamp of one of Santa’s reindeer… 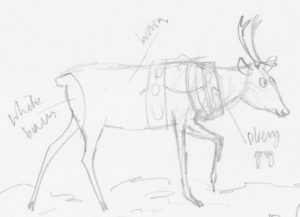 I wanted to ‘nod’ to the original ink line drawn characters and juxtapose them against a graphic background. I wanted to contrast the two together. Working digitally, I used tools that are the most like using a hand tool – pencils, pastels and chalks. I created hand-rendered textures. I avoid any fancy effects.

Having to work quickly made my drawing more spontaneous and instinctive. I prefer to work this way. I actually believed my crazy deadline was achievable!

Unfortunately, when I was in full flow with the artwork, I fell ill with pneumonia and pleurisy. I was hospitalised for a week, and for once, I wasn’t worred about deadlines. Being ill in a second language was an experience. Explaining the story of ‘Le Petit Rouge Gorge’ in French to the doctors was interesting, to say the least! And that I couldn’t have the canula in my drawing hand! Hospital wasn’t fun, but the view from my window was incredible… 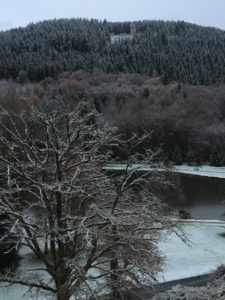 Back home, I felt like a wrung-out sock. I struggled to breathe and my energy was very low. But it was such a relief to start drawing again. I worked very long days, with my husband taking on most of the duties for our rescue donkeys, goats and hens. I’d worked on Mrs Claus, trying to get a feel for a traditional characterisation. I concentrated on the moment where she knits the red vest for Little Robin, of the tenderness of the scene and took things from there. here’s an early sketch… 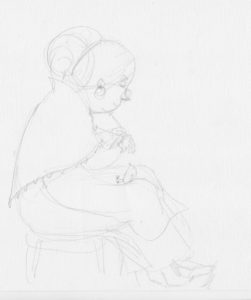 Here’s a colour piece that we never used. Later, we decided that Santa needed to be in the scene. I love the relationship here between Mrs Claus and Little Robin. Reminds me of my Mam, who I miss terribly. She used to knit us the most amazing (and sometimes downright frightful) things. I can still see her fingers, crabbed and swollen with arthritis delicately working the thin needles. She would have knitted the most magical of vests… 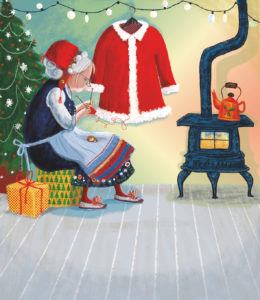 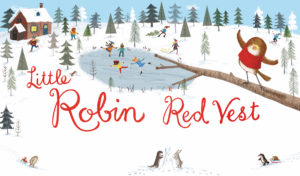 All The Best, Everybody!

Sometimes, I have to pinch myself. What a privilege it is to celebrate Robin’s 20th Anniversary! I am incredibly grateful to Nosy Crow for this wonderful opportunity, for using beautiful paper, binding and foil and for the hardback edition. I hope that Little Robin and his message of selflessness will find an enduring place in reader’s hearts. 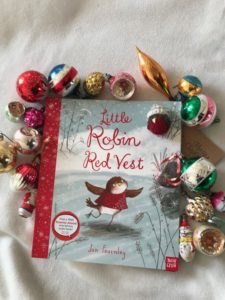 Hello, bienvenue and thank you for looking at my site. This is my first attempt at a blog, and thanks to the lovely Emily Canino, who designed this site and has patiently explained all of this techky malarkey to me, I’m going to try and post a wee something today. It’s March and the apple tree outside my window is festooned with chaffinches, sparrows and nuthatches – all busily disembowelling the fat balls hanging there . Sally, one of my rescue cats is sitting on the end of my drawing table quietly seething at the sight of them. She’s in disgrace at the moment because half an hour ago, whilst I was downstairs making a coffee, she decided to press her bottom all over my Intuos tablet and inadvertently removed some layers from a piece of art I’ve been working on for two days. It’s ok. I found them after a bit of detective work, and am philosophically regarding her input as a learning opportunity.I suppose because I now work digitally, things like that can be retrieved, whereas it’s impossible to save a wet water-colour painting that a cat has walked over – believe me, I’ve tried!! 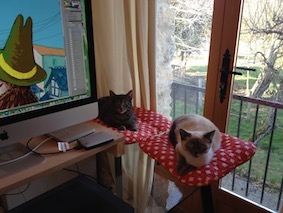 View from my drawing table with two rescue kittens”helping.” These little guys turned up in the middle of a frozen field one day.

I’m an author and illustrator of children’s books. I used to live in West London, but now I live in rural France. It’s a bit different to say the least. More about that another day. Some things about life here are great, others are somewhat perplexing and challenging. 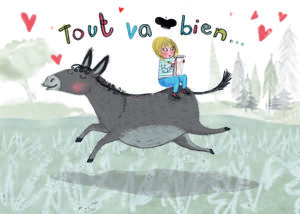 I’ve been meaning to blog for ages, but somehow, one way or another, things have happened and there hasn’t been time to sit and collect one’s thoughts. I’ve been frantically finishing off artwork for a book. Last month, the weather was so cold, the water supply froze and we had to trek across the field and break the ice in the stream to bring buckets of water for the animals – all of them froze solid within five minutes and split the buckets apart as if they were paper. The winter days have meant an endless round of feeding hungry donkeys and goats, tucking up chickens at night, filling hay nets and fetching yet more buckets of water so we can flush a toilet. It’s a bit of a contrast to life in London! And then, when everybody is fed and watered, my day as an illustrator and author begins…

Recently, something came through the post that made me want to start my blog. Advance copies of my first ever picture book made using digitally produced artwork – Edgar and the Sausage Inspector, published by the extraordinary Nosy Crow, arrived in my postbox. Such a small object, a joyful thing, which represents a long and steep learning curve for me. I am utterly delighted, relieved, stoked and incredibly proud! 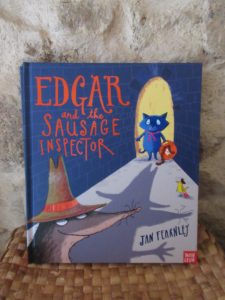 I was so delighted to see this slightly naughty book in my postbox!

Very excited to announce Edgar and The sausage Inspector is coming out soon!!! Here's the cover! and you can read a bit about it on my lovely new Publishers Nosy Crow website here. 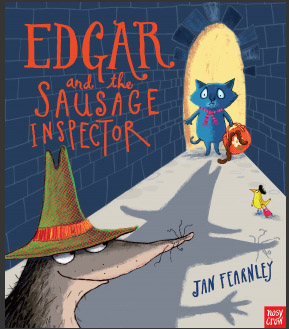 Hello! Our site is under construction 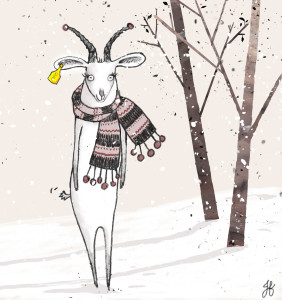 For now here is one of my recent images… I hope you enjoy my new site and do come back soon!