About Bottlenose Bay and Harry and the Jaggedy Daggers

These stories started with one little image. This is it. 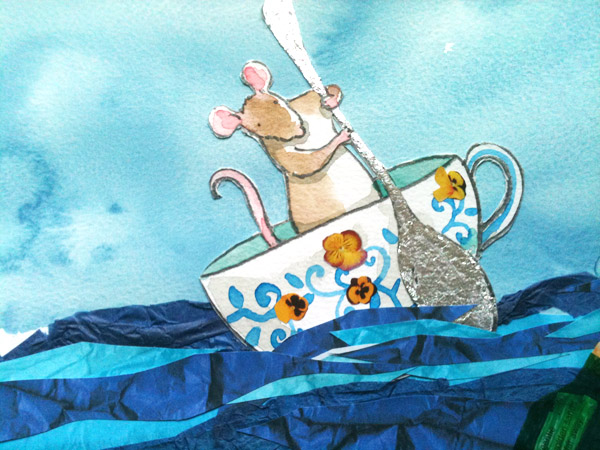 My publisher at that time – loved it. She asked me to conceive a story based around this little character. Not only did she ask for a story, she asked for a series of stories, based on this little mouse and his world.

So I sat down and had a think. I’ve always been drawn to the way in which children (and adults) use their imaginations. One can take a found object – a piece of junk, a stick, a leaf, a funny old bit of wood, and reimagine it’s purpose in a completely different way. Ask a child to climb on a big boulder and it won’t be a rock they’re climbing on – oh no, it’ll be a spaceship, a pirate galleon, a witch’s head… you name it. A toothpaste lid becomes a mouse’s teacup. A scarf becomes a pair of butterfly wings… a pile of pallets becomes a goat house!

So, with this in mind I wanted my little mouse (who later became Harry) to find ‘human’ things in his world – and use or repurpose them in an imaginative and interesting way. As a child I used to love wandering along the beach to see what treasures the sea had washed ashore and I wanted the same feeling in my story. It was also very important for each story to have integrity and stand on it’s own.

So the idea of Bottlenose Bay was born.

The books needed to have a real sense of place and so it was in my mind that I should make a map. I LOVE maps and in my view, they are absolutely fabulous for encouraging ‘reluctant readers’ (hate that expression!) to read.

You put a map in front of a child who tells you they are no good at reading and pretty soon they’ll be finding all sorts of things and pointing them out to you. Maps are such cool things and they inspire a wealth of other activities. So I was determined to include a map in each book.

I started drawing out my map of Bottlenose Bay, and as I went, I thought about where the animals would all live and who they were. It’s very much inspired by where I grew up.

I decided to make a mock up of the map. I wanted a lovely, slightly vintage feel to it. This was my first attempt. 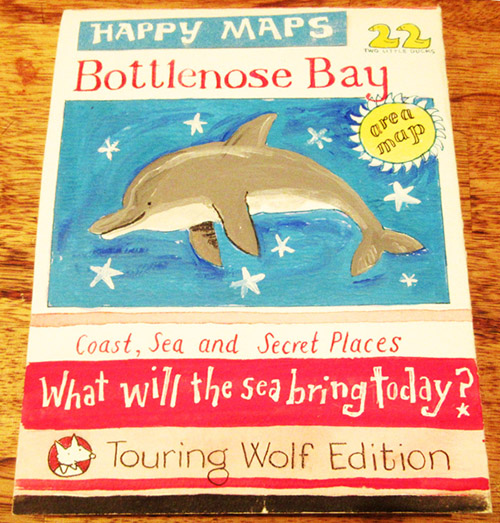 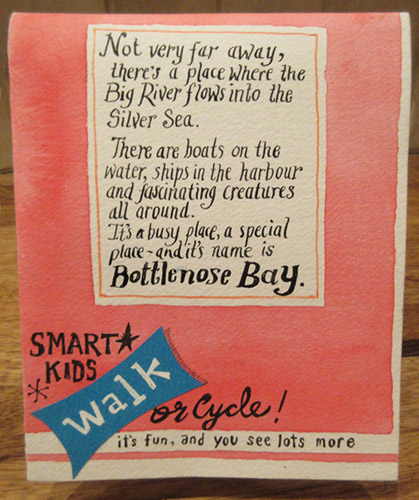 I really liked this version, but my publishers – and their sales team – preferred a much more traditional, old-school treasure map style. So this is how it ended up’ 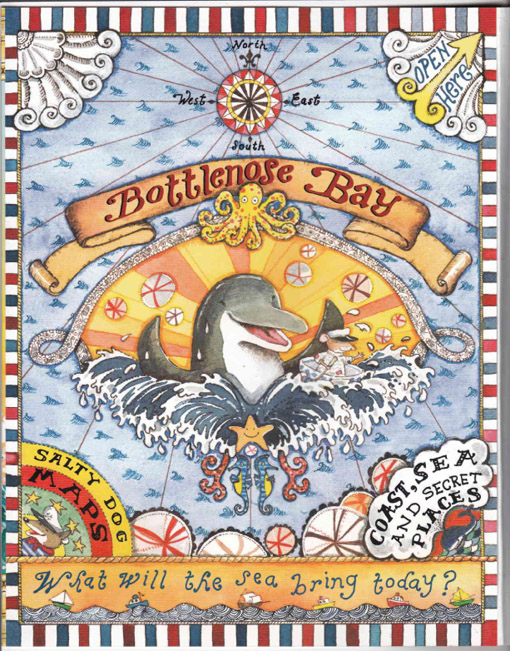 Much later, I received a bit of feedback from a nameless, faceless committee – I think I was told it could have been the sales team – not really sure. They said it was too old-fashioned. But that’s what you asked for! I thought. And then I sighed a big sigh and thought about my original version of the map and I felt a bit sad.

Dummy of fold-out map - The paperback has a FABBY pop-up map, which I'm very pleased with. 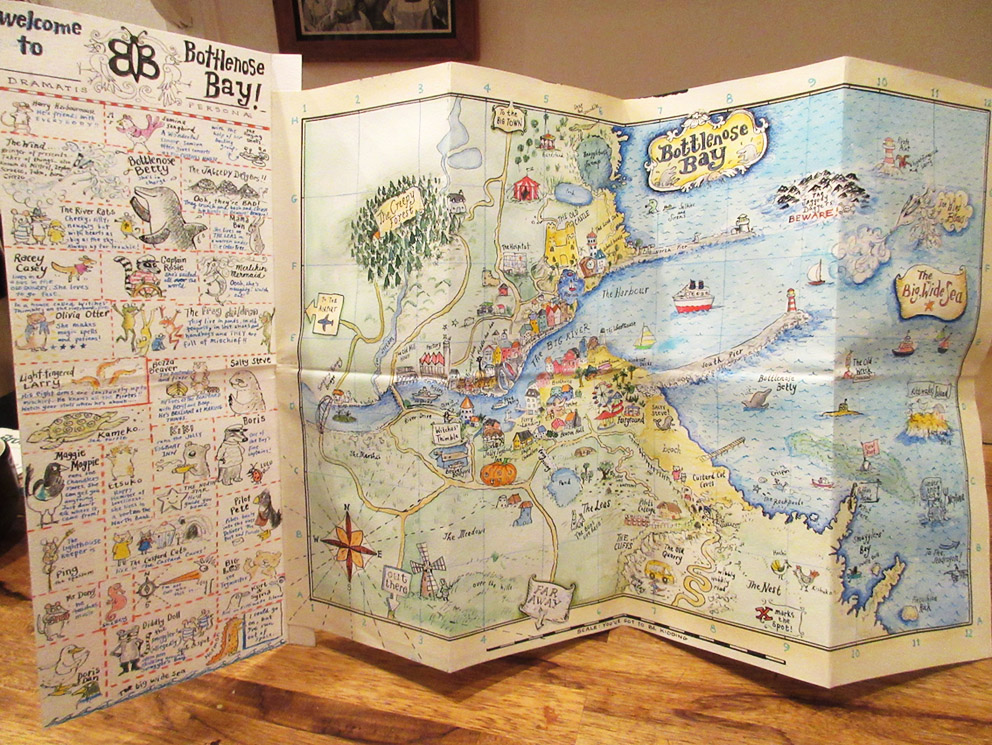 Here is a super-size map of Bottlenose Bay in action at one of my events. These lovely people gave me their permission to take this picture and we all had a great time! 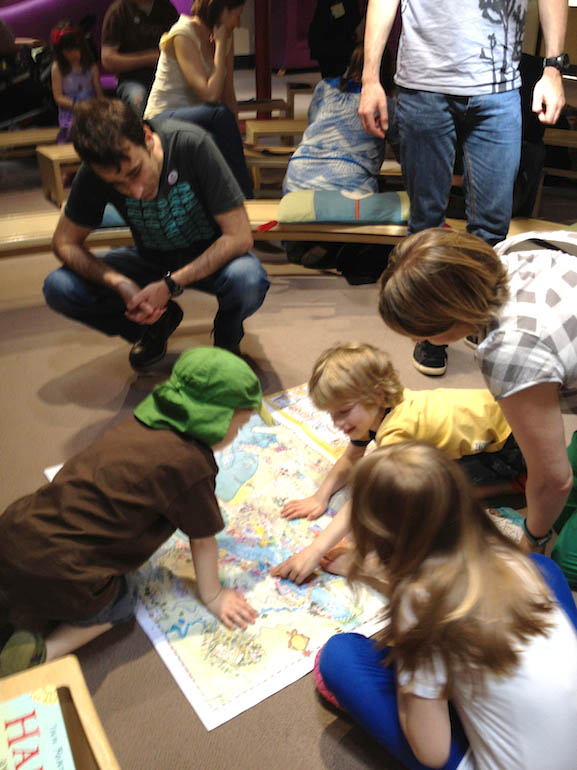 Anyway, about Harry and the Jaggedy Daggers:

Harry is a harbour Mouse living on the Big Winding River. He loves river life and helping out with his little yellow boat in the busy comings and goings of Bottlenose Bay. But one night, something awful happens and Harry’s treasured boat taken by the mischevious Sea and the Wind and is smashed to smithereens in the dreaded JAGGEDY DAGGERS!

But, although Harry is heartbroken, he refuses to give up and just as the sea brings mischief, it brings surprises and treasure too.

Here are some rough layouts for Harry and the jaggedy Daggers

Early character sketches. Trying to decide what Harry should wear! 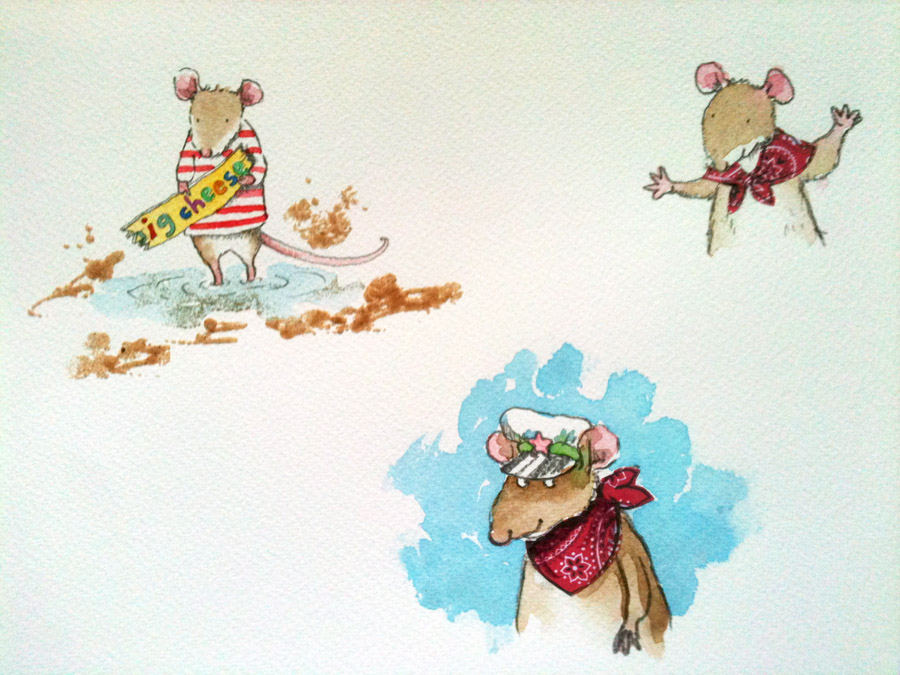 Sketches for Harry and the jaggedy daggers 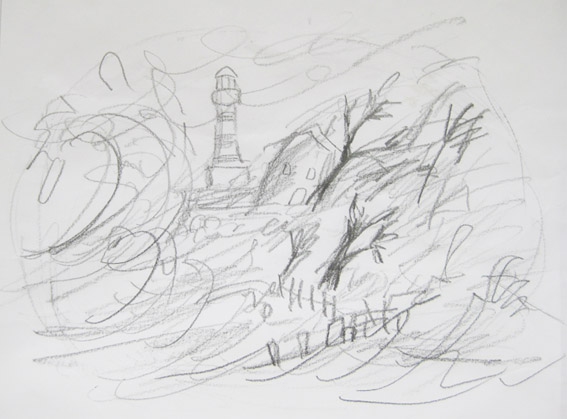 Roughs for Harry and the Jaggedy Daggers 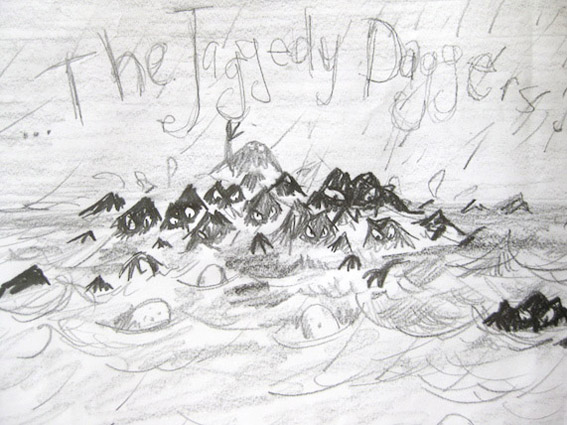 I wanted to bring elements of collage into my artwork, like Milo Armadillo. All of this was created by hand, a mixture of watercolours, gouache, pencil and collage; nowadays I create this digitally. 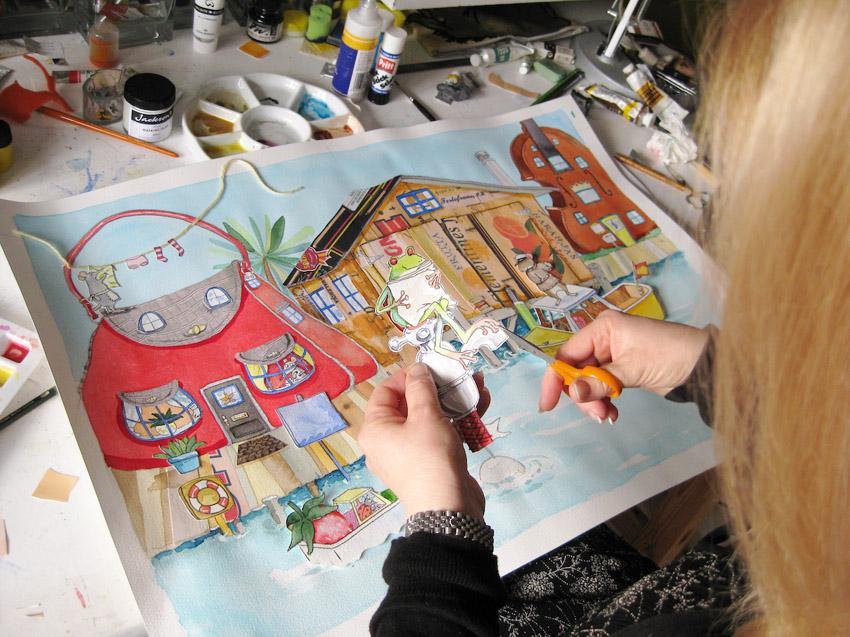 Spread from Harry and The Jaggedy Daggers 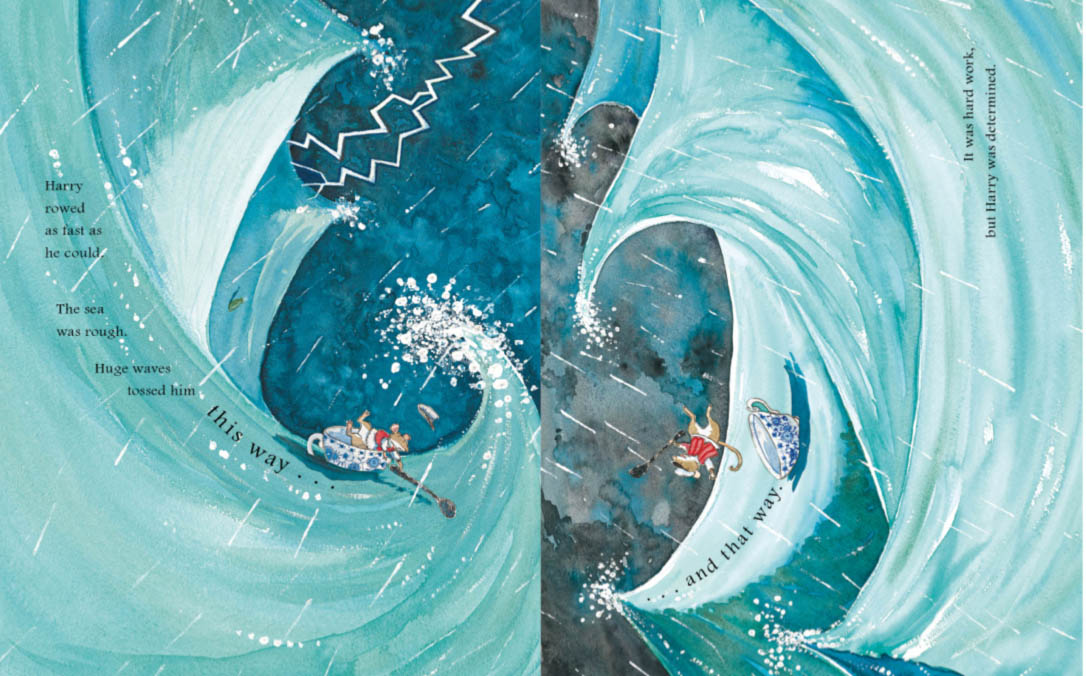 This is Kira, my little wavy baby. She used to sit on my lap whilst I was working. 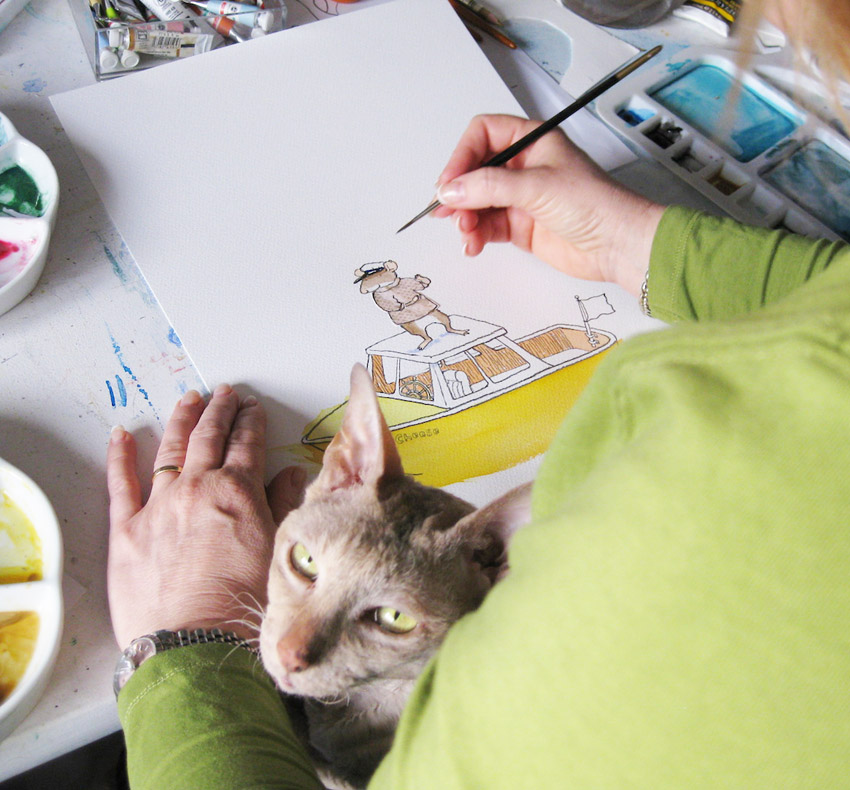 I’ve had some wonderful feedback from lots of very kind people about my Bottlenose Bay Books. All the kind comments and wonderful photographs you have sent me and tweeted have made my spirit soar, so I thank you. At this moment, I don’t think I will write any more. I’m busy doing other things, which I’m very excited about. But thank you to everybody who asked me.

Back to WORK page